This is one of the most unusual garments I've ever seen. I have to hand it to the designer though, for absolutely obliterating the metaphorical box of which innovators must think outside. Holy crap, this is something new and different. So, of course I'm forced to consider the timeline of the tie and see where this fits in. Wikipedia tells me that ties originated as a method to distinguish specific military personelle, then when the Croats were in France the Parisians found the item appealing, which led to a new fashion craze in Europe. I have to admit, this is far from the assumption that I had made previously, whereby I imagined the tie to be a fashionable way to conceal the buttons of a shirt. Another consideration I had previously was that the tie was a barrier to the shirt, like a guard, so that the sloppy eater or wine drinker has a built-in napkin. This way, if he makes a mess he can remove the tie for another chance at congeniality with a distinguished, stain-free guest. This zipper tie now creates an all-new way for the late-night black-tie partier to loosen up... no longer does he loosen his tie and roll up his sleeves, instead his gesture is a somewhat inferior "zip" down, which may be trouble if he's really drunk, because his brain might loosely associate the motion with unzipping his pants, and he may find himself in need of new underwear.
Source: http://design-milk.com/a-necktie-that-zips-zip-tie-from-actual/ 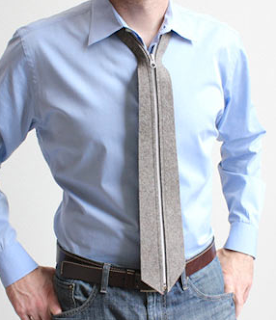 Email ThisBlogThis!Share to TwitterShare to FacebookShare to Pinterest
Labels: fashion

SOME PEOPLE WHO HAVE SEEN THE WONDER OF THE TILES